In 2019, I have joined the Editorial Team of the Journal of Zoology. In this regard, I wrote a blog post about a recent publication of my lab in Paris. It was a lot of fun to interview my colleague Dr. Emmanuelle Pouydebat and her PhD student Gregoire Boulinguez-Ambroise about their paper on the ontogeny of food grasping in primates that has recently been published in the Journal of Zoology. A topic that is of special interest for me because I investigate the Form-function relationships in the limbs of mammals in one of my main projects. 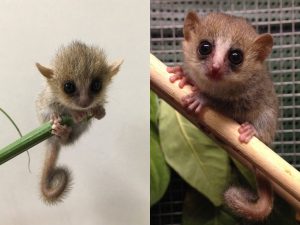 The stars of their study are tiny, furry and large-eyed critters: the grey mouse lemurs (Microcebus murinus). These strictly arboreal primates are excellent climbers and use both their hands (bimanual) in food grasping. Furthermore, they grow super fast which makes them an ideal model organism to study ontogenetic changes of grasping performance.

The results indicate that grey mouse lemurs are under selection for increased grasping ability early in life. The ability to grasp plays a vital role in many behaviors, most notably in arboreal locomotion and foraging and is closely linked to the origin of primates because it facilitated the exploitation of the terminal branch milieu.