Hot off the press! Publication on the neck of birds 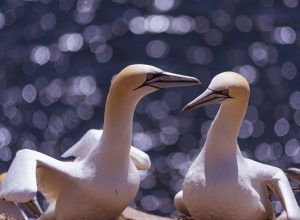 The neck of birds has always been regarded as a classic example of high variability in the number of vertebrae ranging from ten cervical vertebrae in parrots to 26 cervical vertebrae in swans. And it seems that the avian clade includes many long-necked taxa. However, cervical count is not necessarily a determinant of neck length since many relatively short vertebrae may form an equally long neck as few relatively long vertebrae. Furthermore, the wide array of small to very large species makes it difficult to evaluate actual neck length.

We addressed this issue by investigating the evolution of the vertebral formulae and the scaling relationships between skeletal dimensions and body size in a phylogenetically and ecologically broad sample of birds. In our publication (Böhmer et al. 2019 Royal Soc. Open Sci), we investigated a total of 103 extant adult avian species comprising 34 orders and 68 families sampled from the bird collection of the Muséum National d’Histoire Naturelle (MNHN) in Paris. The total number of cervical vertebrae for each specimen was identified and a number of morphometric measurements on the vertebrae and the three leg bones of the hindlimb have been taken. 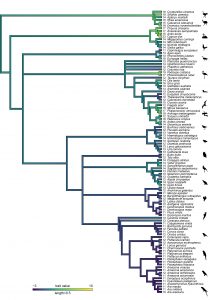 Our results (1) revealed a strong phylogenetic constraint that acts on the cervical count in birds with only some specialists having an exceptional number of vertebrae in the neck; (2) showed that body size does not constrain neck length in birds as opposed to mammals; and (3) indicated a correlated evolution between neck length and leg length. The strong integration between the cervical and pelvic module in birds is in contrast to the weak integration between pectoral and pelvic module. This may be the result of the evolution of a functionally constrained forelimb due to the evolution of powered flight which is compensated by a functionally versatile neck.

This work is part of the interdisciplinary project Avineck (The neck of birds, an arm for robots) in which I work as postdoc. The objective of the ANR-funded project (ANR-16-CE33-0025) is to better understand the relationship between the anatomy of the neck in birds, its mechanical properties, function, and evolution. It is also a contribution to my project on the Evolution of the axial skeleton in vertebrates. in which I aim at to better understand the evolutionary processes that shaped the vertebral column – a key innovation in vertebrate evolution.