My research focus lies on the evolution, function and development of the vertebrate body plan through deep time and my particular interest is to reveal the patterns and mechanisms underlying the evolution of the vertebral column in tetrapods. Other main projects include the evolutionary history of dentition and the form-function relationships in the limbs.

Evolution of the axial skeleton in vertebrates

The major goal of the project is to gain a better understanding of the evolutionary mechanisms responsible for the great morphological adaptability of the vertebral column.

My fascination for the vertebral column started with my master’s thesis („Evolution of the presacral vertebrae in sauropodomorphs: a morphometric approach“) and resulted in my PhD thesis („Evolution of the vertebral column in archosaurs: Hox gene expression and vertebral morphology – implications for sauropodomorph dinosaurs“). During my PostDoc project in Japan, I studied the functionality of the vertebral Hox code in the Japanese lamprey to gain insights into the evolutionary history of the axial skeleton at the base of vertebrates. Through collaborative studies with experts in their fields, we illuminated the evolution of the cervical vertebral column in enigmatic species such as turtles and sloths. The aim of my second PostDoc project in France (Avineck) is to better understand the functional morphology of the neck in birds. Further collaborations on the morphology, development and biomechanics of the axial skeleton including the evolution of exceptionally long-necked vertebrates are in progress!

The major goal of the project is to better understand the differences in the musculoskeletal adaptations of animals with different locomotor modes. 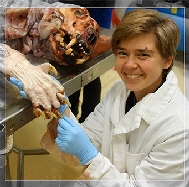 My passion for muscular anatomy intensified particularly during my first PostDoc in France where I dissected a huge diversity of mammals. This allowed me to quantify the limb musculature and to relate the results to quantitative data of limb bone morphology. This provided new insights not only into the evolution of arboreal locomotion in mammals, but also into the relation between forelimb musculature and degree of prehensility. More exciting results on this ongoing project will be soon published here!

Evolutionary Veterinary Science (EvoVetSci) and the evolutionary history of teeth

The major goal of the project is to contribute to a better understanding of the evolutionary history of teeth and to provide explanations for dental pathologies from an evolutionary perspective. 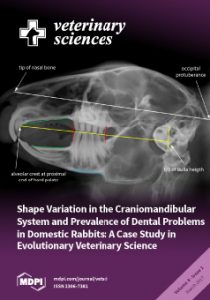 Teeth have always fascinated me since I studied the milk teeth of the fossil rhinoceros Prosantorhinus germanicus during my Bachelor’s thesis. Fossil evidence of complete sequences of dental ontogeny in extinct mammals is rare but contains valuable information on the animal’s physiology, life history, and individual age. My study on the dental eruption series and replacement pattern in Prosantorhinus revealed heterochronic variation in the timing of molar eruption relative to that of the replacement teeth. A newborn and a juvenile fossil rhinoceros revealed stress-induced pathologies recorded in the developing dentition, which were described in another study.
Through collaborations with experts in their field, we investigate dental problems in rabbits. We aim at improving our understanding of the relation between morphology, evolutionary history, and pathologies. 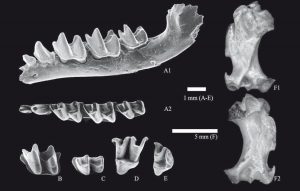 Field work has always been a major part of my research and I have participated in a number of field projects mainly focusing on Mesozoic sedimentary rock. Thanks to the great support by my PhD supervisor Prof. Dr. Oliver Rauhut, I visited Patagonia (Argentina) and South Africa. In collaboration with colleagues from the Museum of Paleontology in Trelew (Patagonia) and the University of the Witwatersrand in Johannesburg (South Africa), we excavated fossil vertebrates from the Triassic and Jurassic.

During field work at the Miocene locality Gratkorn in Austria, I was fortunate to discover exceptionally preserved remains of insectivorous mammals. They revealed surprising differences between German and Austrian assemblages.

Sookias RB, Böhmer C and Clack J. A. (2014). Redescription and phylogenetic analysis of the mandible of an enigmatic Pennsylvanian (Late Carboniferous) tetrapod from Nova Scotia, and the lability of Meckelian jaw ossification. PLoS ONE 9 (10): e109717.doi:10.1371/journal.pone.0109717