Going down the rabbit hole? New publication on dental pathologies in pet rabbits 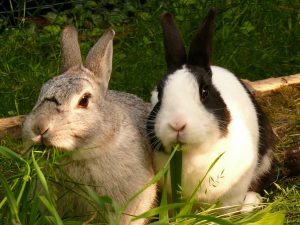 Tooth problems are among the most frequently encountered diseases in pet rabbits, but early symptoms are often overlooked.

Although pet rabbit medicine has improved over the last 20 years, diagnostics and targeted therapy are still often restricted as compared to medicine in cats and dogs. Among the most frequently encountered diseases in pet rabbits are acquired dental problems. However, early symptoms are often overlooked because the affected animals first appear completely asymptomatic.

The occlusal reference line according to Böhmer & Crossley (2009) facilitates objective interpretation of malocclusion using standard skull X-ray images. Despite its proven usefulness in most domestic rabbits, there are a few exceptions. In wild rabbits, the occlusal reference line is not suitable for application because of cranial shape differences (Böhmer & Böhmer 2017). The analysis revealed that the skull in pet rabbits is generally more quadratic, whereas it is longer and flatter in wild rabbits.

The angle between the skull base and the palatal bone varies among pet rabbits and has been identified as important proxy in the objective interpretation of norm- and malocclusion (Böhmer & Böhmer 2020).

This collaborative work is part of the Evolutionary Veterinary Science project.