New publication: Modularity of the neck in birds 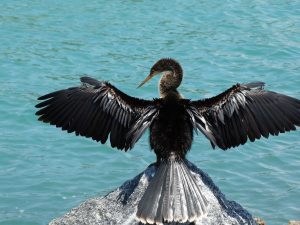 The darter bird, Anhinga anhinga, has a long, „snake-like“ neck. It projects its head and neck forward like a throwing spear to catch the prey.

Birds vary significantly in the number and shape of vertebrae in the neck. Despite this variation, a similar regionalization along the neck of a diversity of avian species has been observed. Depending on their position within the neck, several cervical vertebrae form a unit sharing morphofunctional characteristics. Virchow (1910) and later Boas (129) investigated the mobility in the neck of birds and noted regional differences. According to differences in vertebral morphology and maximal dorsoventral mobility between successive vertebrae, the neck of birds can be divided into three main regions (Virchow 1910, Boas 1929). Here, we quantitatively tested this hypothesis in a sample of phylogenetically diverse species using state-of-the-art 3D geometric morphometrics (Terray & Plateau et al. 2020 Evolutionary Biology).

Our results revealed seven modules that were found across the studied birds. Only the darter bird (Anhinga anhinga) has two different modules that are not present in the other species. It is a highly specialized bird that uses its double-S-shaped neck to hunt its prey. The hinge-like apparatus formed in the middle of its neck allows the quick catching of prey. Our study also showed that „shape trajectories“ (i.e., the morphospace trajectory from the second to the last cervical vertebra) can be divided into two categories. Bird species that share the same shape trajectory are phylogenetically close and experience similar developmental and/or environmental factors.

This work is part of the interdisciplinary project Avineck (The neck of birds, an arm for robots) in which I worked as postdoc. The objective of the ANR-funded project (ANR-16-CE33-0025) is to better understand the relationship between the anatomy of the neck in birds, its mechanical properties, function, and evolution. It is also a contribution to my project on the Evolution of the axial skeleton in vertebrates. in which I aim at to better understand the evolutionary processes that shaped the vertebral column – a key innovation in vertebrate evolution.