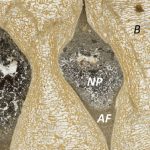 Even T-rex could have suffered a disc protrusion?

The intervertebral disc is a fibrocartilaginous joint that connects two successive vertebrae and allows for movement between the bones. It is commonly considered to be a unique feature in mammals because many non-mammalian taxa such as crocodiles have a ball-and-socket joint between the vertebrae, and birds have uniqe fibrous joints. However, in contrast to present-day reptiles, the vertebrae of most dinosaurs do not have ball-and-socket joints. Did these extinct animals have intervertebral discs that had been „replaced“ during the course of evolution?

In general, soft tissue preservation is rare among fossils, but it provides considerable information on the paleobiology of extinct animals. For our study (Wintrich et al 2020 Scientific Reports), we histologically sampled 22 specimens representing 19 taxa of different amniote clades. The histological analyses of living and fossil taxa allowed us to infer the soft part anatomy of the intervertebral joints.

We found evidence for an intervertebral disc in fossil reptiles, including non-avian dinosaurs, ichtyhosaurs, plesiosaurs, and marine crocodiles. Our results indicate that the intervertebral disc evolved at least twice – once in mammals and once in extinct diapsid reptiles. 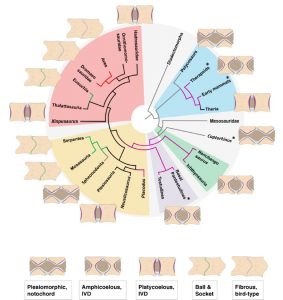 Ancestral state reconstruction of the different types of intervertebral joints in amniotes.

Even Tyrannosaurus rex could have suffered a slipped disc: nachrichten.idw-online